Now if we have our inventory we can start adding new weapons!

We won’t be doing shooting / reloading in this post. Let’s focus on basics first.

For this post I will use assets from Unreal Marketplace. I’ve chosen Military Weapons Silver. 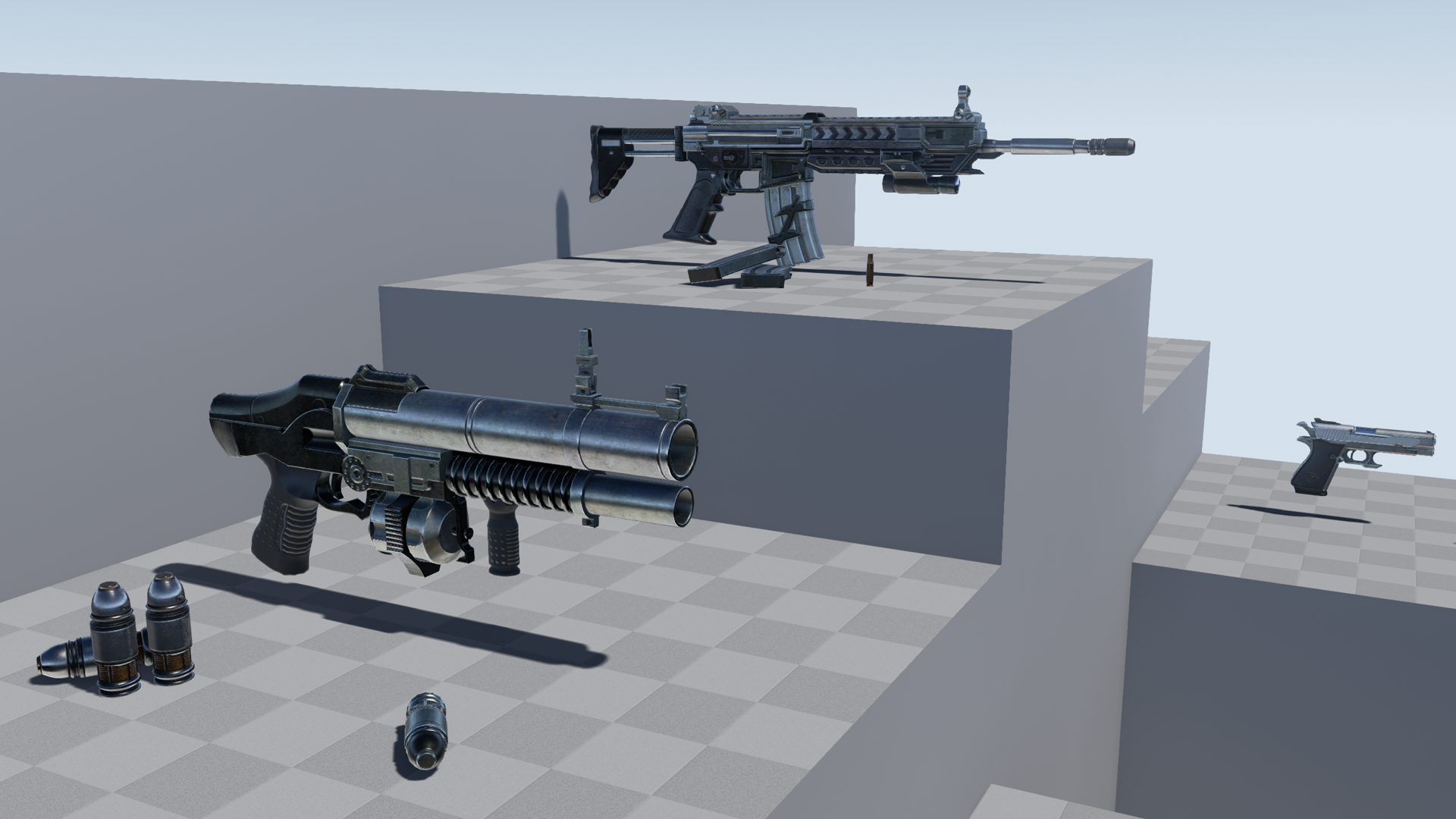 Create new Enum named WeaponType and add: Pistol, Rifle and Shotgun to it. You should know how to add Enums from reading Adding Inputs Tutorial.

First we need to create base class for all of the weapons. Each weapon will extend from this class. Thanks to that we will be able to do some functions on them like Fire, Equip or getting variables like Ammo without knowing the exact weapon. This will be something like object-oriented programming.

Create new Blueprint extending from Actor and name it BP_BaseWeapon. Now inside:

For now it’s it. Later this blueprint will have variables like CurrentAmmo, MaxAmmo etc.

Before we go further we need to update WeaponBackpackItem structure we had created earlier. WeaponToSpawn shouldn’t be Actor. It should be Class reference to BP_BaseWeapon. We will be using SpawnActorFromClass node later and we need reference to the class not to the actor.

USEFUL TIP: If you change structure variable name or type everything connected to it in blueprints will be disconnected! You need to double-check if everything is connected after changing something in Structures.

Again create new blueprint based on BP_BaseWeapon. Name it BP_Weapon_AssaultRifle.

That’s it. We have three weapons now!

On the left side you are seeing bones from skeleton. You can create sockets connected to bone. It can have relative location and rotation. We will use sockets to attach our weapons. This documentation from Epic is ideal place to learn about creating sockets and previewing meshes. I won’t be posting about how to create sockets – please read documentation.

Create these sockets from b_RightWeapon bone:

If you are previewing your meshes in sockets don’t be afraid that they won’t fit exactly to hands. We will be using AnimationBlueprint to fix that.

Animation blueprints controls how skeletal mesh will animate. It can take data from owner (in our example it will be GameplayCharacter) and use it to drive animation. Please read Epic’s documentation before moving forward.

We will be assigning those variables in Event Graph.

Now go to Animation Graph. Create something like this: 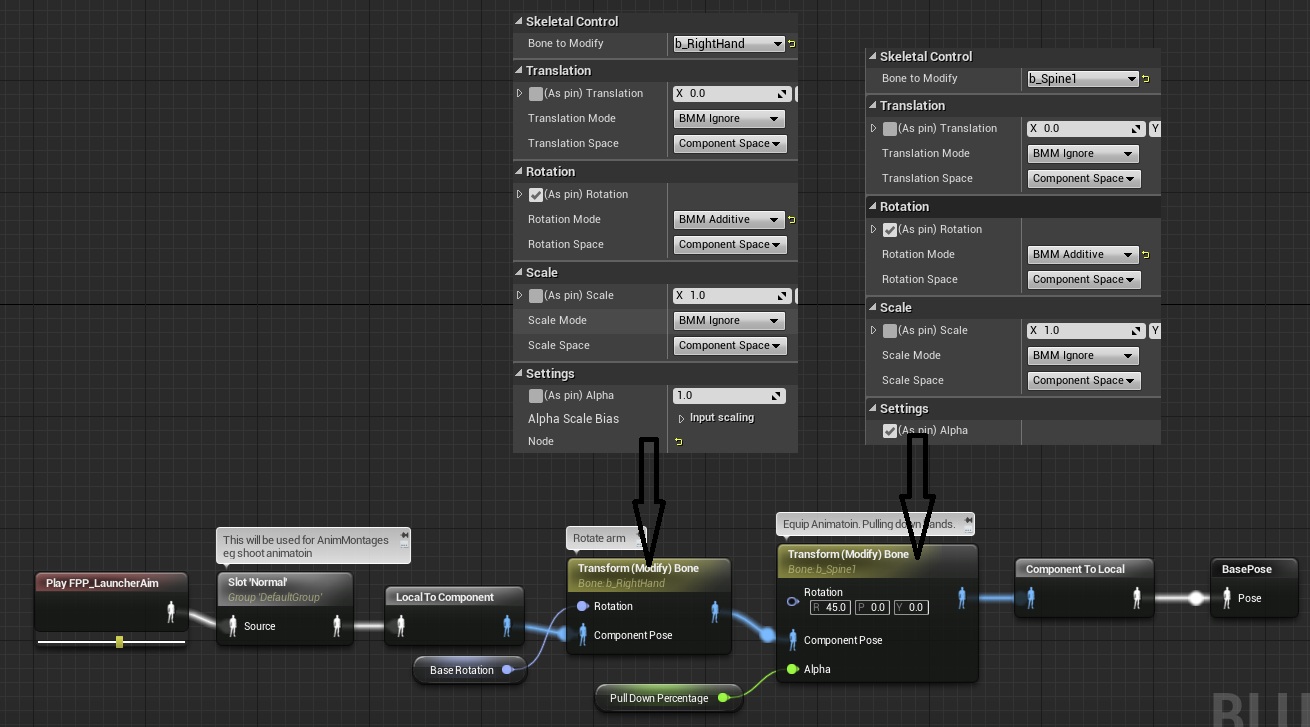 Now we need to blend pose by Enum – by our WeaponType. 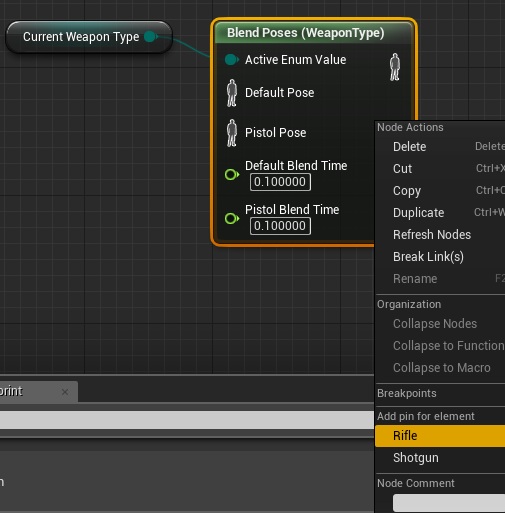 You will be able to fill all of the TransformBone blocks but there is a new block called TwoBoneIK. 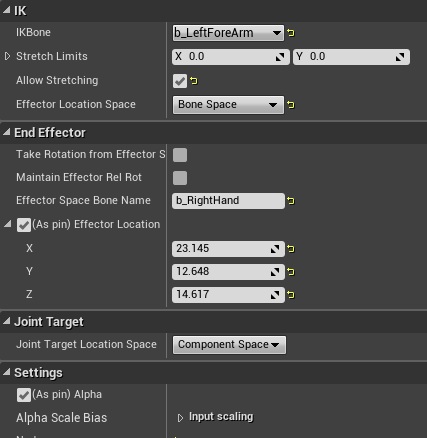 Basically what it’s doing it’s taking b_LeftForeArm and trying to change bones location to focus on b_RightHand. If you select this node in Event Graph you will be able to change the location!

I’m using it to change left hand location to hold the weapon. TwoBoneIK is powerful and you should learn it!

Here you can find the whole animation blueprint.

That’s all in Animation Blueprint!

Gameplay Character will be responsible for spawning weapons, attaching them to slots and changing them. Open GameplayCharacter and add some variables:

After variables let’s move to functions.

Those are all functions for now. We need to create one Custom Event in Event Graph because we will use Timeline to drive equip animation.

Our timeline is driving float variable and a event.

Basically it will tell AnimationBlueprint to rotate hands down and up. When hands are down we are firing event to show the weapon we are equipping.

The last thing in Event Graph is to create key bindings for 1,2,3 and fire EquipWeapon event. 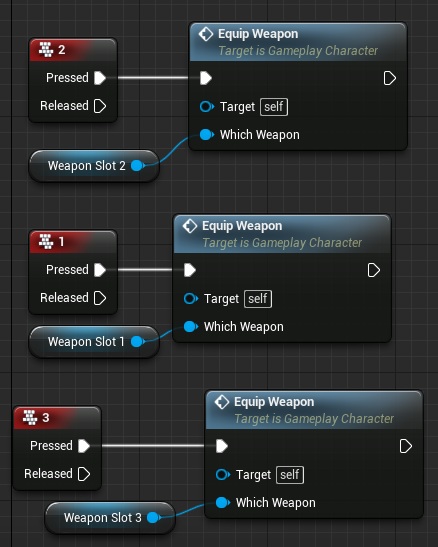 Now if you want to test this out just add a button to UI_Debug_WeaponSelection like this one:

93 thoughts on “How to add weapons – basics + equipping”