Earlier I have created really simple leadeboards which can be used quickly in GameJams but now I will do something much more better. It will be simple as well, but have much more possibilities.

In this tutorial you will learn how to create online, cross platform leaderboards for your game using PlayFab.

It’s backend platform which can be used to:

I have tried all free services like Playfab to create leaderboards. Why Playfab?

You need to have Visual Studio installed to compile the Blueprints PlayFab plugin. Don’t worry you won’t be writing any code!

In order to move forward you need to download PlayFab SDK. Just use download zip button. Please read the readme file and open client ExampleProject. Try to get your register / login to work using readme file at github site. It will guide you with Playfab account registration and you will get the most basics knowledge about framework. Take time to figure how to register / login!

If you are ready just copy PlayFab plugin to your plugins. Make sure you are using Client version.

You should watch all of the tutorials made by Playfab – for example about leaderboards. They are in Unity but you will get a lot from them.

Playfab uses JSON to store data on the server and you will be sending and getting JSON data as well.

My loop is really simple: 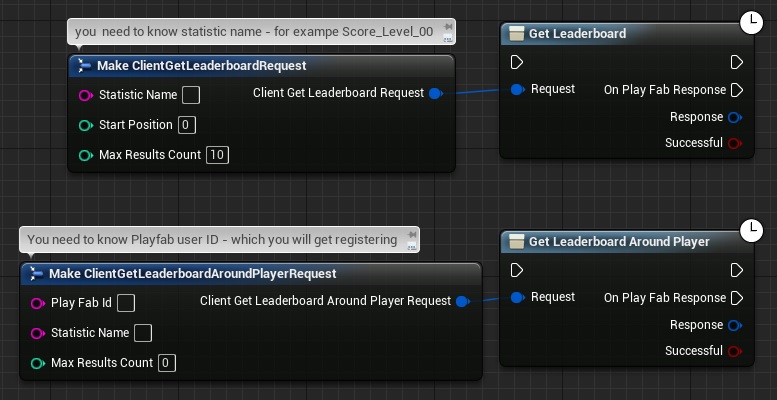 It is simple. You are storing player stats using names – in this short example “hiscore” with a value. (SetNumberField) In my case which I will show you later it’s “HiScore_LEVELID”.

You are getting all players in range that you provided. You can decode JSON data and use foreach to get the values. They are hardcoded as:

Getting data is really simple. You can use GetUserStatistics node as well to get the “hiscore” value. Leaderboards nodes gives you arranged players depending on the stat you are referring.

There is node called UpdateUserStatistics which can directly set player stats but you shouldn’t use that as players can figure out how to post results. By default PlayFab is disabling this feature but it can be enabled in your playfab settings:

You can use this node to test things out but for sending (updating) actual data you should use cloud script.

This looks more complicated but it’s not. User just request to call function (in cloud script) with some input (JSON data) and server will give you results using JSON data.

I’m creating empty json data as I want to have one function to update each level scores, and you can’t use args.level in this case. You can learn more about this here.

Make sure you have the same function in your cloud script which can be found in PlayFab -> Game -> Server. Just download the file that’s already there. Add this function and upload the file – remember to publish after submitting.

That’s all basics information before we move forward with implementation. You should experiment with Example Project provided by PlayFab it’s super easy just learn how to get and set JSON data.

I will use ShooterGameInstance for functions / events used for PlayFab. For me it’s the best place as it will be always there even when I will reload the map.

Now go back to ShooterGameInstance and add two new functions.

Now I will add some helper functions.

When changing player name I’m saving it with password right away.

I will use this function to print PlayFab errors – it will be easier to debug things.

Before start add some dispatchers.

This will get current level leaderboards arround player and find player in results – then get the position and set it in PlayerPosition array.

Get Cloud Settings URL need to be called if you want to use Run Cloud Script node.

In earlier tutorials I have created SubmitHiScore function in ShooterGameInstance which now need to be updated to call SendHiScore event:

Make sure to update this as well. Basically when changing new hi score locally we want to change it on the Playfab server as well.

There is one thing left. SubmitHiScore uses float as input and you can’t send float in PlayFab it need to be int. You need to floor the float and then convert it to float again. Normally you will have your score and hi score as int but I wasn’t prepared for that. 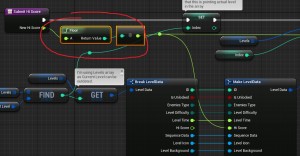 When calling SendHiScore make sure you used this floored float.

Next thing is to prepare playfab on game launch. In Game Instance there is an event called Init. This is starting point for your game and here you can prepare playfab for login.

Now it’s time to create UI for our leaderboards.

First let’s create UMG to show PlayFab errors for example when nick is already taken or there was problem with internet connection.

Open event graph and add new Play Far Error Structure variable named Error. It should be editable and exposed on spawn. Next let’s get some values from the error and set our Text blocks:

Create another Widget named UI_SetPlayerName and try to recreate hierarchy:

Button_Register should have OnClicked event added. It will be used to try to register:

So basically each time player will click register game will try to use the PlayerName value to register with Playfab.

Editable Text should have OnTextCommitted event added. Here we will update PlayerName variable:

And it should have OnTextChanged event added as well. It will be used to show / hide register button if nick is to short. You can add more checks here if you want. (eg: special characters

That’s almost all. Last thing: I will use this screen to show the mouse:

Now you can test this out. In your MainMenu_P level after loading the game :

Simple check if PlayerName is filled. If not – show register screen.

Create another Widget named Widget_LeaderboardItem and try to recreate hierarchy:

So basically it’s filling the data to Text Widgets. If DisplayName is PlayerName it means that this data is from player. Will change colors then to make player more visible in leaderboards later.

Now the most important part – Leaderboard UI which will show top scores and scores around player. Create new widget named UI_Leaderboards and try to recreate the hierarchy:

If you read previous tutorials you know that you shouldn’t directly change variables from different classes – use functions instead.

This function will fill vertical box with Leaderboar.

This will basically check if scores was downloaded (array is empty or not) if yes – just pass data to Fill Leaderboard. If array with scores is empty try to download them in ShooterGameInstance.

The same thing goes for scores around player.

This will check if we want to show top scores or scores around player and call right function.

Last thing is to know when leaderboards scores will be downloaded. We will use dispatcher from ShooterGameInstance in Construct event:

So basically every time ShooterGameinstance downloaded scores this UI will know about it (if visible of course) and will try to update leaderboard vertical box. Easy as that.

That’s all – you can add this UI to viewport to check it out. Remember your player need to be logged in.

I will be showing leaderboards in level selection screen and in summary. First let’s update UI_LevelSelection.

Try to recreate this hierarchy. This screen was implemented in earlier tutorials. I will just add UI_Leaderboards widget to designer and make sure I can toggle between level info data and UI_Leaderboards:

Still in Event Graph there are 3 events: OnSelected(UI_LevelIcon_01, 02 and 03) which points to Update Data. I will use those to check if we want to show Leaderboards and if yes – update UI_Leaderboards.

This way each time player will click on level – if we are showing leaderboards UI_Leaderboards will be updated with data form that level.

Button_Leaderboards should have OnClicked added:

And that’s all! You can check if everything is working by opening MainMenu_P -> register player -> then show leaderboards.

In UI_LevelSelection I Was hiding / showing widgets. Here I will use WidgetSwitcher to toggle from Leaderboards and player score data.

Try to recreate hierarchy. Basically I have added Widget Switcher to the center and switch between two Vertical Boxes. One with UI_Leaderboard and second with score information. I have market isVariable for 3 best players and player position:

Button_Leaderboards should have OnClicked added:

It will toggle WidgetSwitcher to show Leaderboards or score info.

It’s checking if Player Position is there in the array for current level ID. If yes – just change PlayerPosition text. If not – try to get the scores as it will update PlayerPosition array as well.

It will get us top 3 players. If the score’s aren’t there – try to download it.

So basically when this screen appears it will try to get Top Scores (maybe it is already downloaded) and it will wait for Game Instance to call OnScoresDownloaded. If so – update Top 3 players and player position.