While creating patterns I did find them to be really hard. I came up to idea to create aim functionality that will trigger slomo as well. In this tutorial I will do right mouse button aim which can be used for X amount of time.

Basically I want to do slomo when enabling aim but for player and current weapon I want normal time dilation. This way I will be able to fire normally without slomo. Devastating feature… that’s why player will have only 6 seconds to aim during gameplay. Use wisely.

So basically when we enter aim mode widget will toggle progress bar.

I will update this widget from GameplayCharacter when we will be in aim mode. This will make sure to update the progress bar and text.

This way rifle will fire without slomo.

First thing to do is to update GameplayCharacter. 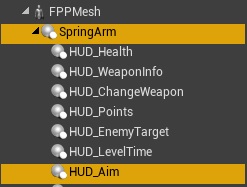 Widget location will be interpolated between those two locations.

Now in Event Graph find Begin Play event and in the end update the widget to draw default variables:

Now I want to trigger aim using Right Mouse Button. Input can be found in GameplayCharacter as I was using it for Sniper alternative fire mode:

Make sure to add DisableAim custom event. It should be straightforward. This will manage aim mode toggling and inform UMG.

This is handling AimRate (from 0 to 1) to change Camera FOV and later update hands animation in Anim Blueprint. It’s decreasing time left as well and updating UMG widget. Last thing is manage Time Dilations. Aim mode leave Character and Current Weapon with normal time dilation so you can normally shoot and everything else have slomo. 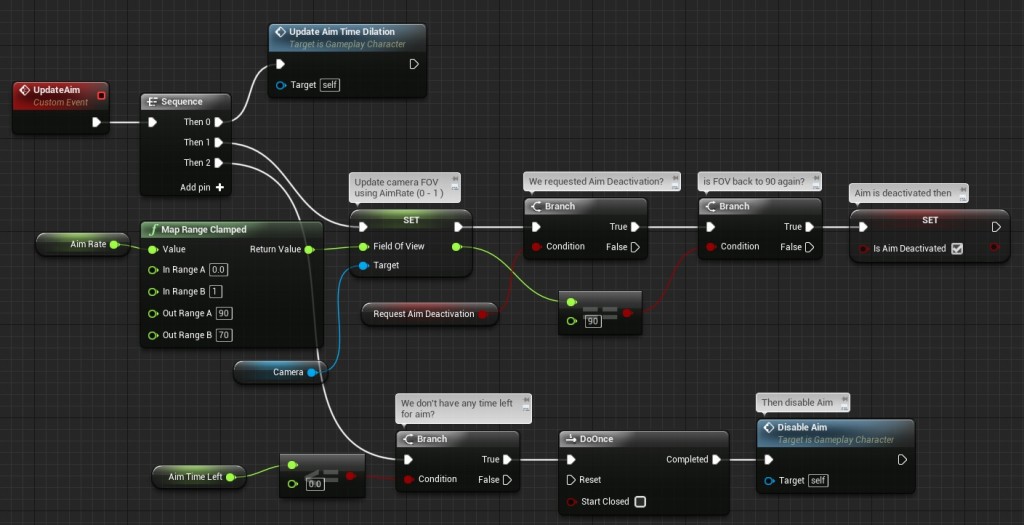 This is actually updating FOV and checking if we have Time Left. If not – call disable aim and when FOV is again at 90 deactivate aim tick.

And that’s all in Character!

In Event Graph make sure you are getting AimAlpha from Character and set it to AimingAlpha:

This way I don’t need to interpolate the value again. It’s done in Character as it drives FOV as well. I can use the value here as well.

So basically when we are aiming b_Root bone location will be increased by 13,0,4 with interpolation.