I’m after TKGameJam 2016 and I have another proof that you can do a lot in Unreal Engine 4 in small amount of time.  Game was created by me, @smallshake and @ogniok with special thanks to @politko! We haven’t had any graphics artist in the team.

Dive into madness in this fast paced taxi simulator. You have ten seconds to get your clients to the destination or else they won’t pay you! 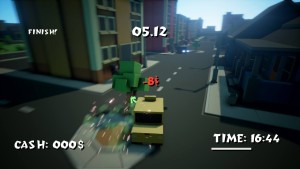 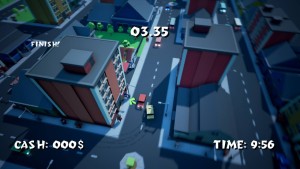 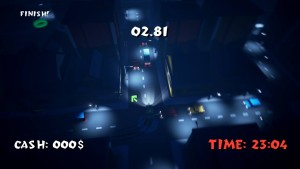 Game can be downloaded at GameJolt.

I would like to show you guys couple of pipeline decisions we did. Maybe it will be helpful for you.

We haven’t had any graphics artist in the team so we decided to go with simple box graphics which can be easily manipulated in Maya. Basically the game have only one material with base color as parameter. Always create master materials as you can do global changes without need to click on each material. Thanks to really basic shader we avoided lightmaps which can be pain during jams as they are calculating some time. To reduce static shader cost you can disable Static Lighting in Project Settings. 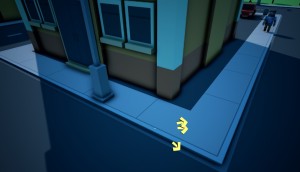 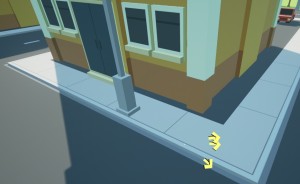 Another advantage of fully dynamic lighting was day/night manipulation.

It was super easy with Blueprints. It was only one Timeline 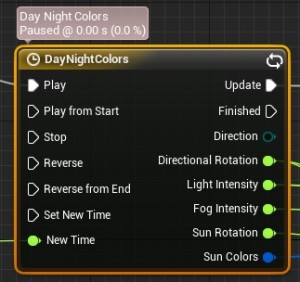 Driving all of the data:

Easy as that. It was separated Blueprint so it could be added to any level. (eg. main menu)

To avoid over burned lighting we have added simple cube map to Sky Light. 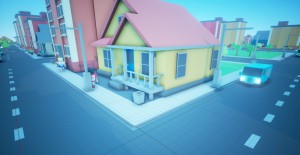 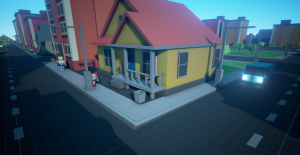 Cube maps was updated with day/night cycle as well.

To avoid light overhead AI car lights was added as particle system which is super fast.

Lamps lights can be created exactly like this. Only player car need to have spot light.

We knew that we would need to create really big map and we haven’t any level designer. Thanks to UE4 tools we have scaled down the work needed.

Small districts as blueprints as well:

To do such thing you need to make sure your props/roads/buildings are using the same grid. Thanks to that we were able to create whole level in couple of hours. Another thing is that each gameplay element was added to those Blueprints as well. (roads, lamps, target points etc) so we haven’t “hard placed” anything in the level. It was easy to iterate later on.

We wanted to create something more casual/arcade than default UE4 car physics so we have taken simple 2d physics described here (java script implementation here) and implement it quickly in Blueprints (yes, blueprints as it was faster to just check how it will work)

When implementing your own physics you need to make sure it’s updating with UE4 physics. We have added FloatingPawnMovement component and update theirs physics state depending on the custom 2d state. For movement we have used FloatingPawnMovement.MoveUpdatedComponent() with Sweep option to check if we are colliding with something. Easy as that!

To have more arcade movement:

As you can see you can implement your own car physics using Blueprints in no time!

We want to have a feeling that the City is alive and we only had 48 hours to do so.

Cars are always checking if they will collide with something so they can drive through crossings as well.

To be sure cars won’t stuck we are resetting whole thing when player is outside the view.

Humans was created with less movement detail but the same way – using splines. We have added some noise to spline movement so each human is moving different than other. Also he is checking if car is near, if yes – try to run 🙂 When hit just enable ragdoll. Simple as that. As for optimisation humans tick 2-3 per frame when not in viewport.

And basically that’s it.

Game scope was big but when using Unreal Engine 4 tooset we were able to create such game in 48 hours.