You guys requested melee tutorial and I’m right after game jam where my colleague (cheers Tomek!) did really simple but powerful melee weapon. This tutorial will be about:

In this tutorial I have used Animated Medieval Bludgeoning Weapons Pack which basically isn’t needed in this tutorial but with animations it’s easier to show you guys how to do melee damage.  (btw hope Ironbelly will do more first person medieval animations like two handed swords, dual weld weapons etc.

So basically what you need is:

It isn’t needed for melee but I would like to show you guys how I’m creating weapons to be easy modified by designers.

Basically here you can put all of your mesh statistics and data which you are interested in. (eg. UI texture reference, weapon type enum, attack speed etc) 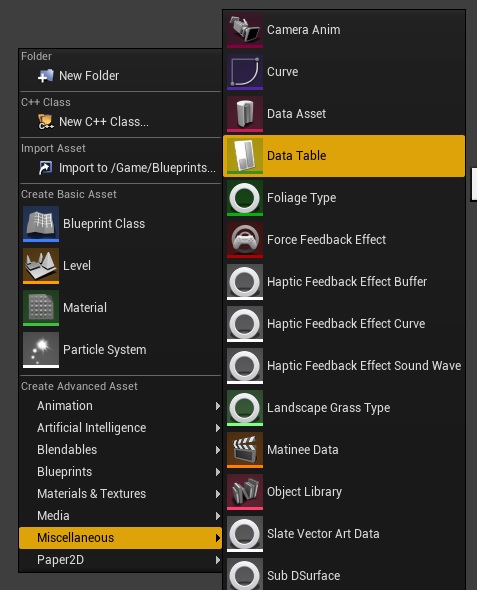 Pick some name for your Weapons Data Table.

Open it and add one weapon.  Make sure it will have Skeletal Mesh assigned to WeaponMesh.

Why you should use DataTables? It’s really fast to iterate while using them. You can have one folder in your Content named Data with all of your data tables (eg. enemies stats, perks, level informations) so people won’t be searching in your code / blueprints to change some variable they will have one place with all of them.

You can find more information about Data Tables here.

Next create new Blueprint Interface named IDamage. It should have two functions:

And GetHoldingWeapon function with one output:

Interfaces are used to communicate between classes. You can create function with output as well which is super useful.

Now go back to your BP_BaseWeapon and add some variables:

In Viewport tab make sure you have added Skeletal Mesh Component which will be root.

Sockets names are hard coded as you see. If you want to use them for trace start / end – just put them into your skeletal mesh.

Note: You don’t need to add them – we will have small algorithm to get mesh bounds and calculate start end trace. It’s optional but you will have more control of melee trace with them. 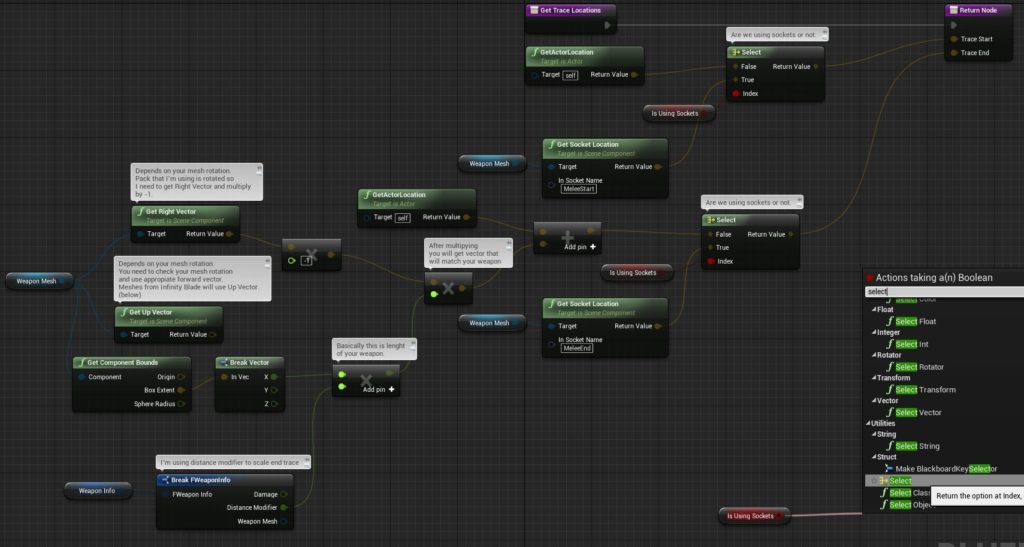 This part is important take some time to figure out what it does. Part with sockets is simple but without them it’s more complicated but still with small amount of calculations.

I’m taking box extend of a weapon which will give me lenght on X. Then I need to get the same direction vector (and it depend on weapon – read comments) to multiply my extend with it – so it will point end of the weapon.

What you can do here is to add Socket as Root and rotate your mesh, but more pro way is to have the same rotation for all of the imported weapons. If you are using Infinity Blade weapons they will use Up Vector and if you are using Medieval Bludgeoning Weapons Pack they are using Right Vector multiplied by -1.

This is making sure we won’t add damage twice to the same actor in the same attack swipe.

We will be calling this function in tick, during animation that’s why it’s needed.

Now go to Event Graph and add some Events.

As you can see it’s responsible for weapon configuration.

This should be self explanatory. Basically weapon is waiting (IsInAttack) to check what is under line trace.

Now when we have weapon class ready we need to attach weapon somehow to our character.

I’m using Character with hands (FirstPersonCharacter_MedievalBludgeoningPack) from Medieval Bludgeoning Weapons Pack but it is doable in any assets that you have.

First your Character need to have HoldingWeapon variable – of course extending from BP_BaseWeapon.

Then double click on GetHoldingWeapon to override interface function and return HoldingWeapon.

Now in your Begin Play you need to:

Let weapon know to trace and do damage

Now we need to inform holding weapon that we would like to trace and do melee damage. What’s the best way to do this? Use animations and anim notifies.

Pack that I’m using have couple of attack animation and I will use them, but you can use any animation you have.

Now open some attack animations and add you notify when attack should appear.

And that’s it! If you want to add damage to actors/enemies you need to add IDamage interface to them and add Event Take Damage. AI isn’t in scope of this tutorial but it’s on my list 😉