This tutorial is long and not so easy. As always take your time!

There is couple of great tutorials over the internet which you can try before this.

I have created couple of feature request for Epic so it will be simpler to create such inventory. 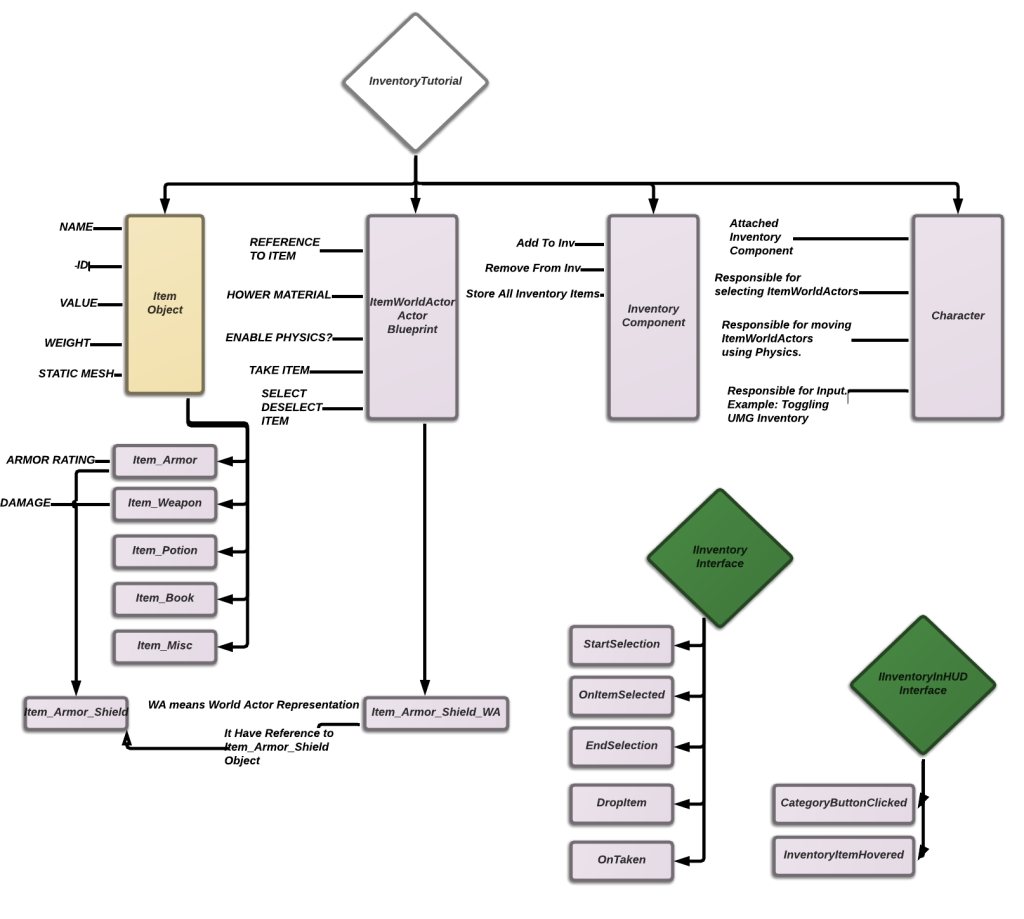 Items will be object oriented and will use Objects instead of Actors. Let’s create first base Object for items.

And that’s all for now. It will be base class for all of the items. It doesn’t have any damage, armor rating variables.

In Skyrim some types of items have dedicated variables such as damage, armor rating or special effects. To have the system more generic each new item category (armor, weapon, misc, ingredient etc)  will extend from Item class.

USEFUL TIP: This is the place where you can add equip type, mount type to the object . I won’t do this because it’s not in the scope of this tutorial. I won’t be equipping items to hands or body.

This is the place where you can add equip type, mount type to the object . I won’t do this because it’s not in the scope of this tutorial. I won’t be equipping items to hands or body.

They do not have any custom variables.

If Item is Object how to add it to level?

Yes, Objects can’t be placed into world. They are just data blueprints which aren’t generating any draw calls.

That’s why I will create an Actor that will have reference to Item object.

Create new Blueprint extending from Actor named ItemWorldActor. Open it and those components: 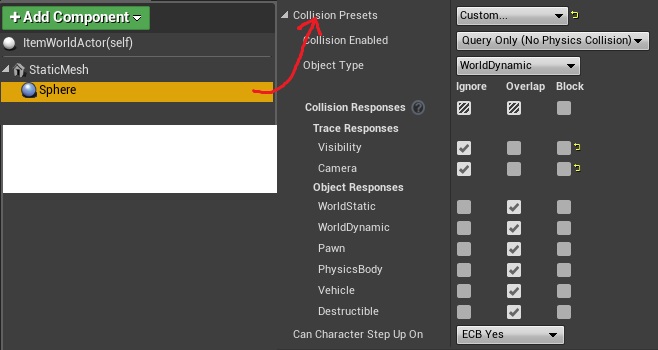 Now here’s the trick how to show Item’s static mesh in editor without spawning it. Open Construction Script and add this:

So basically each item will have an Object and Actor interpretation. Quick example: 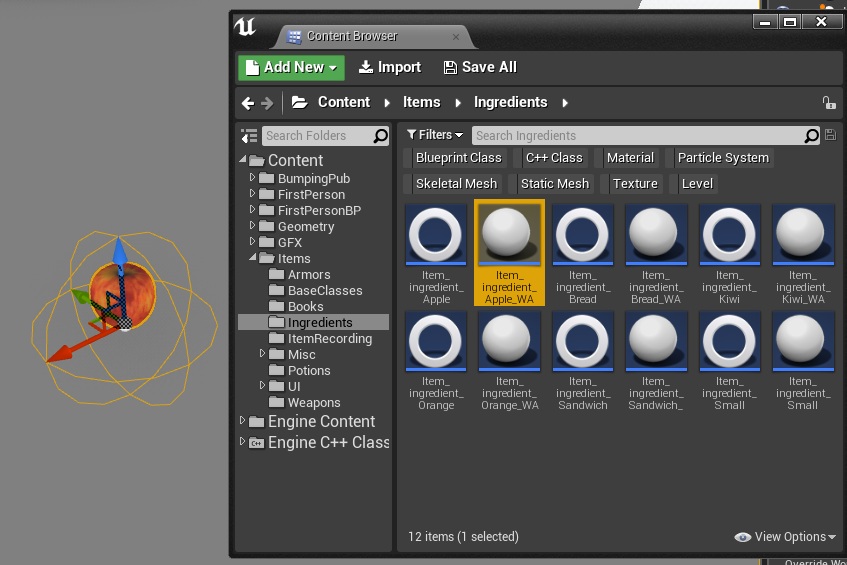 At this point nothing will happen with the item but you should get the idea here. It would be much more simpler to generate those WA actors from Objects, but we don’t have possibility to create new data types in content browser from Blueprints. Another thing are thumbnails – UE4 is missing simple “Capture Thumbnail” in current component stage (after changing something in Construction Script) – without thumbnails it’s hard to find the items.

btw there is great way to change variables for more than one content browser item. Select more than one Item and choose “Bulk edit” 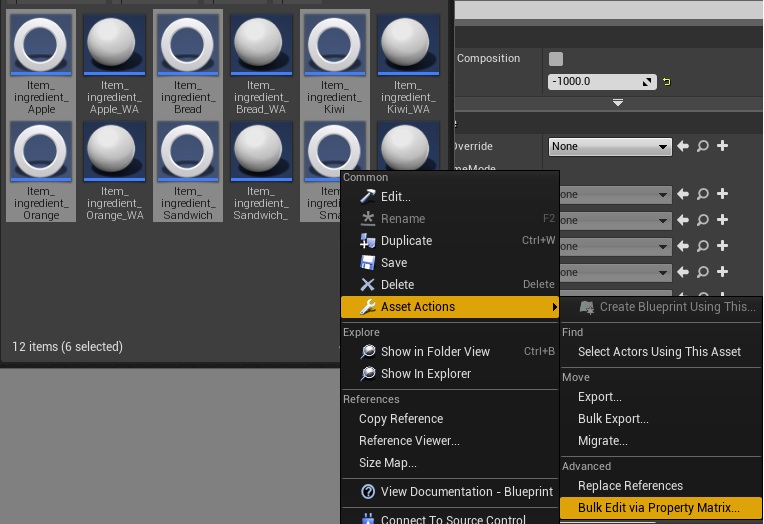 We need a place to store inventory items somewhere. I will use Actor Components for this at it can be attached to any actor.

But first I would need some structure that will store Items with their count in the inventory (example. have 2 the same items in inventory). Create new structure named InventoryItem:

That’s all for now.

So you have the idea how the basics classes will work but what about communication? I will be using Interfaces to communicate from one blueprint to another. There will be two Interfaces one for UI (UMG) communication and one for in-game communication.

Before start create new ENUM named ItemCategory. It should contains:

This ENUM will be used for UI only. You could try implementing UI without it but it will require more work.

Now create new Interface named IInventoryInHud and open it. It will contain 2 functions:

Create another Interface named IInventory with those functions:

We will try to use only those interfaces to communicate within whole system.

Base classes are done now let’s move into some Inventory management. Open your Inventory Blueprint and add those variables:

Comments in screen should be enough. So this is basic Add / Remove functionality.

What this does is basically picking a location in front of the player (Owner, because Inventory will be attached to Player as component) and rotate it based on Rotation Phase. Rotation Phase will be increasing when dropping items from inventory.

It’s simple. When dropping item from inventory we need to create again World version of the item. That’s why I’m spawning ItemWorldActor with specific Item reference. Sequence is simple:

That’s all in Inventory Blueprint for now!

Next step is to add possibility to select an item in world and add it to inventory.

And one function: SetItemRef with one Item Object Reference as Input: 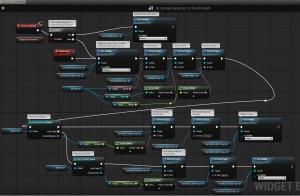 It looks complicated but it isn’t. It’s just updating Text Values from the Item information, and checking if it’s Armor or Weapon to decide how custom text should look like. The first bool is used to determine if this widget is shown in Inventory UI (which we don’t have yet!) or game.

Go to Construction Script and update it:

I’m saving original material and changing size of the Sphere. Simple as that. 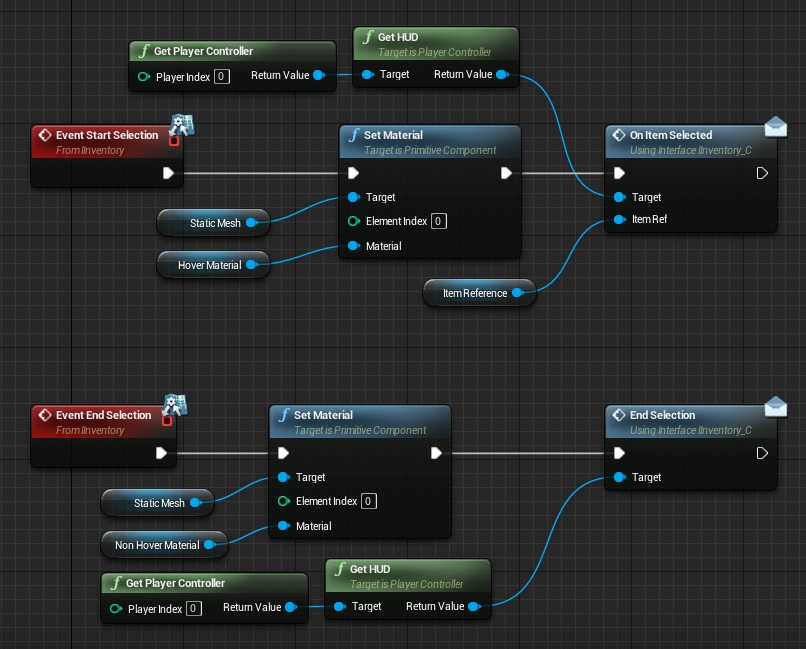 It is changing the material and letting HUD know about the selection. (I haven’t touched HUD yet!) Last part here is to implement OnTaken event from IInventory interface:

Simple as that – add selected item to inventory ping all item actors about physics and destroy item actor.

Implement IInventory Interface on the HUD and add those events: 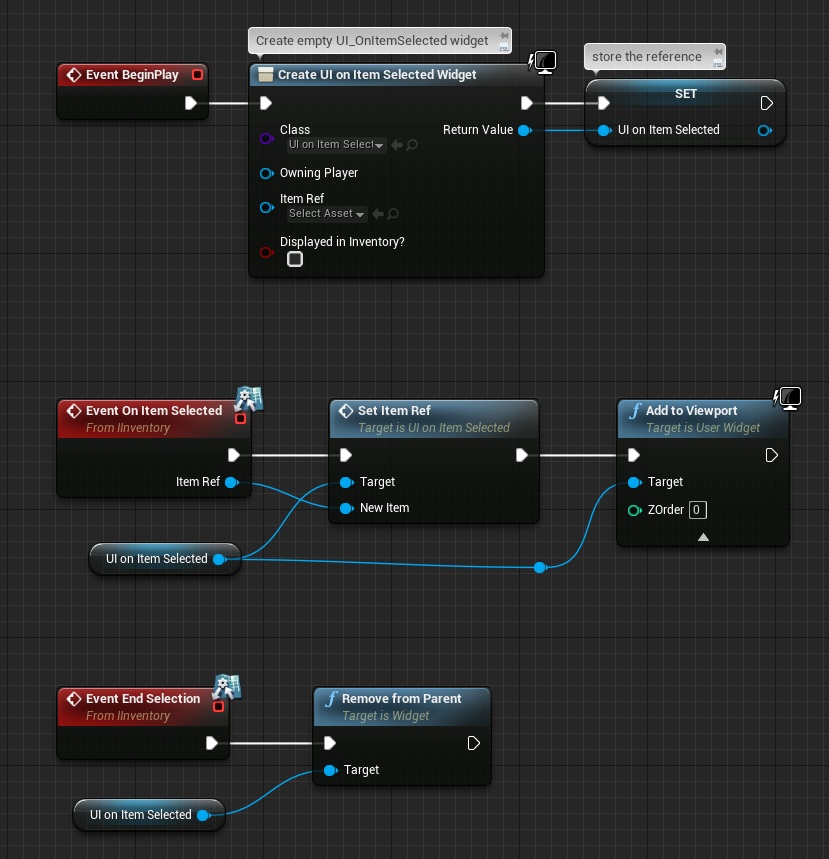 This will be most critical part. Character is responsible for communicating with inventory and items. Before you start make sure you go to Project Settings -> Input and add those inputs: 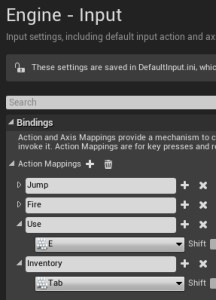 Add Inventory component and PhysicsHandle component. You can remove the hands mesh as it’s just cover the screen unnecessary. 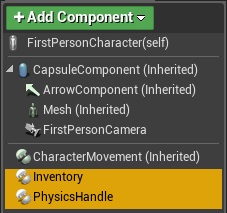 And one function named GetItemOverCrosshair with:

It’s searching for IInventory items over the crosshair.

It’s looking complicated but just read  the comments and variable names! This function is responsible for grabbing the item. (to move the item you would need to change PhysicsHandler location when item is grabbed – which will be done in couple of sec in Tick function!)

Simple as that. I’m resetting the variables just in case here!

Here’s where the magic comes. It’s searching for IInventory Actors and calling StartSelection / EndSelection if found new IInventory Actor. It will try to grab the item as well but we are missing one important part from the input.

At this point you should be able to add the item to inventory and grab it when holding ‘E’ key.

Next thing I would like to achieve before starting to create UMG Inventory is to create a way to render 3d object in UMG. Currently there is no simple way to achieve this. I will use Render Target but with some “hacks”

What I would like to accomplish here is to have a render target which will render my object to 2d texture. The problem is with assets different scale and pivots.

Basically if you will be in pro game development your graphics team will create specific 3d items for your inventory. With the same pivot and scale – to fit the screen (Screen = Texture in this example)  as good as possible. I’m not a graphics artist and I’m using meshes from packs. They have different scale and different pivots. My goal here is to have a system that will scale the items and move the pivot so I can render any object without thinking of the scale or pivot. Unreal is able to do that.

This event will be responsible for that. Create new Custom Event named UpdatePivotAndScale:

It will be used when selecting items in inventory.

Now add custom events responsible for rotating the actor. They will be called from UMG Inventory:

And that’s all here. Now we need to spawn the actor somewhere.

Why I’m spawning it that far away? It need to be outside the sky sphere so we will get alpha in Render Texture.

At this point functionality is there. Now we would need to implement Inventory UMG to show the inventory.  It won’t be so easy as Skyrim Inventory is advanced.

This will let know Inventory UI that category button was clicked.

Now in Construct let’s change Text_Type text depending of the type: 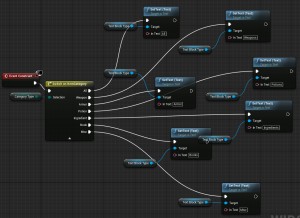 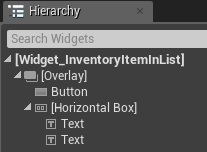 It will check how many of the same item do we have.

Now add Tick event which will be responsible for hovering the item in list:

It would be simpler to have OnHover event in Buttons. I have requested this feature on the Unreal Engine 4 Forums. For now we need to use Tick to determine that.

Make sure Is Focusable is set to False. Just click on Root of the Hierarchy. It’s needed as I will use TAB key to open and close inventory. TAB is used to control UMG widgets as well. Setting this to false will disable TAB to focus. 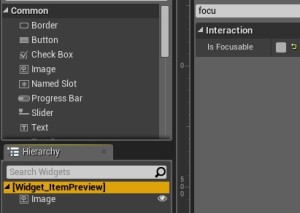 This is how I’m communicating with Recording Actor to rotate the Actor.

Overwrite On Mouse Button Down:

Overwrite On Mouse Button Up:

This will be called when our mouse will leave whole widget. That’s all here!

Now go back to UI_Inventory and try to recreate my hierarchy:

This will be responsible for showing items depending on which category we have clicked. The first one is All. Here’s next: 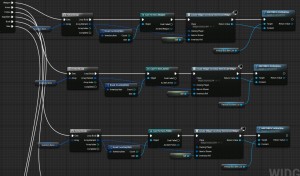 I won’t be showing rest as it’s only changing Cast To – Specific Type. Try to fill the rest switch. 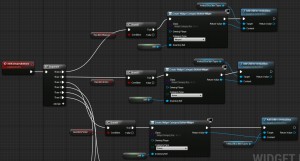 I won’t be showing rest as it’s only changing the bool type and category type. You should figure this out.

And another one named AddAllCategoryButton:

This will add “ALL” category button.

Add another one named UpdateCategoryItems:

It will search for all items and select if we have Weapon, Armor etc.

Add another one named UpdateData:

I have directly set variable in Widget_ItemPreview you should use Function for that!

I have separated it for 2 parts.

Yes – managing UMG in Blueprints is really hard.You can spend days to improve your Blueprints visibility. I assure you that this can be done much more easier. Just understand how it works and try to create it by yourself!

Last thing here is to get “E” and “TAB” events. Currently UMG doesn’t support Inputs from Project Settings so you need to Overwrite On Key Down Function:

And that’s all here!

And that’s all. You have Skyrim like inventory completed!

I have used Bumping Pub for showcase. The pack isn’t modular but it’s great for showcasing things! Shield has been found here and weapon here.

You can found ready to use Inventory in Marketplace as well. I have done this for you for free and hope you will learn from it!