This will be last enemy for the demo, rest of the characters will be implemented after different environments will be added. I’m listening you guys and this time I will use Behaviour Tree instead of Blueprints. Some goals:

After last enemies you should have enough knowledge to create simple AI by yourself using Blueprints. This time I will focus on Behavior Tree.

If you made all enemies tutorials you should have enough knowledge about AI to move into Behavior Trees. There were long way from first enemy tutorial and now I know which features should I use, and how.

Why you should use Behavior Trees instead Blueprints for AI?

I’m not the specialist about AI and BT but I really encourage you guys to learn this topic if you want to create games with AI.

For this tutorial I will use Futuristic Soldier. The pack isn’t so bad, but it’s lacking animations. There is an issue with UE4 about uniform scale and Physical Asset. (btw if you can please vote for this issue maybe Epic will resolve it faster) so you won’t get ragdoll from this character. I will use death animation instead which isn’t looking good.

I have imported soldier_anims_separated_LOD0 and they are with gun. You could import mesh without a gun as I did in Marine Tutorial. Thanks to that Futuristic Soldier can lose his weapon on death.

Make sure you are importing the file with:

You should get all animations imported separately.

As always in Blend Spaces add some interpolation: 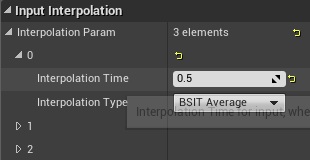 Do this every time doing blend space.

Create new Enumeration named FutureSoldierType. It should have 3 values:

Using this enum will decide which type of AI / movement enemy should have. 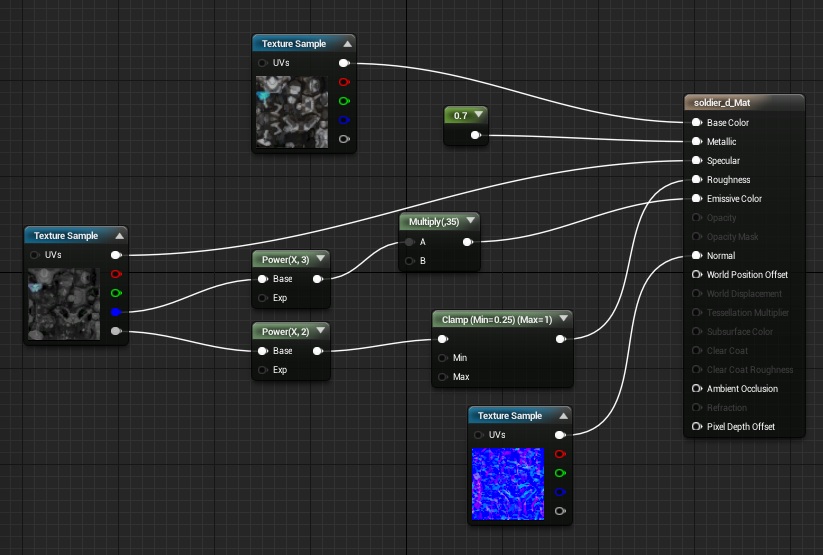 You could create black and white mask for Emissive using Gimp, I have done this different way, but it’s always better to create masks. I don’t want to use Gimp or Photoshop at this stage 🙂

Open Character Blueprint and add one ENUM variable (from FutureSoldierType) named SoldierType. It should be editable.

It’s just playing death animation and make sure mesh will be on ground. 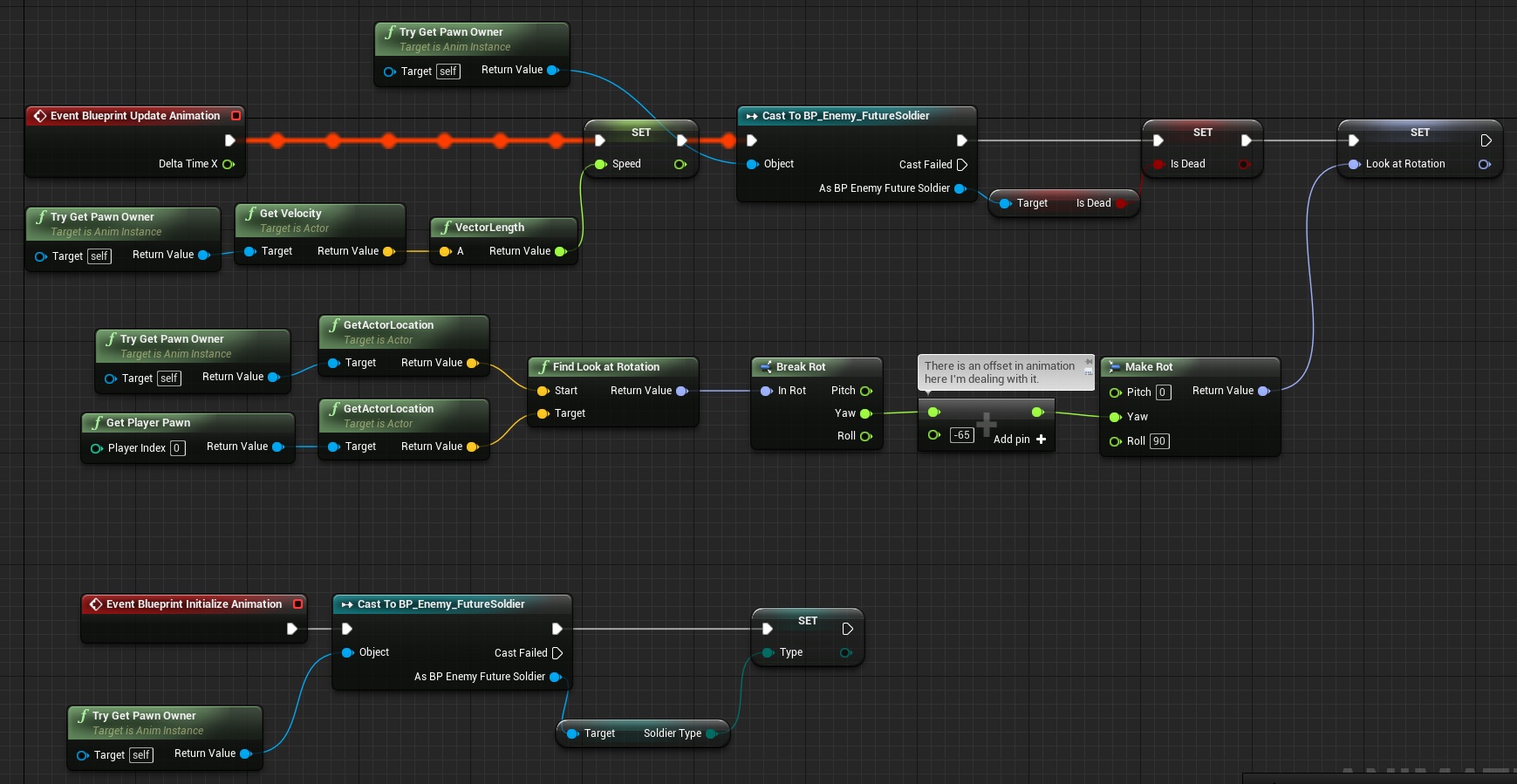 As you can see this is just filling the data. I’m using LookAtRotation instead of LookAtLocation this time because of weird skeleton. In 4.9 there will be possibility to do to LookAtLocation with local/world space, it will help a lot! 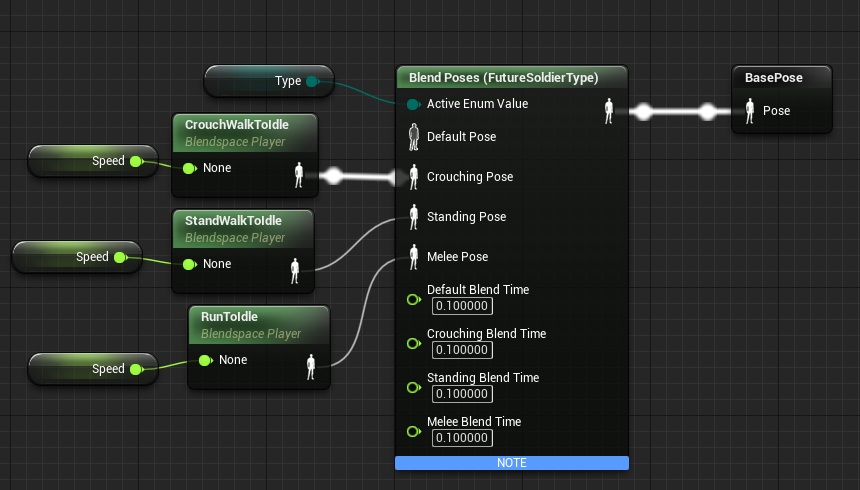 And here’s the rest of the graph:

Should be straightforward for you guys at this stage. That’s all in animation blueprint.

This is telling Pawn to be possessed by AIControllerClass. If you want to use BT you need to have AIController assigned to your Character/Pawn. 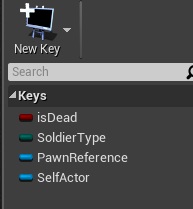 Before we move into creating Tree we need to create some helper Blueprints.

When you deal with Tasks/Services or Decorators you will be Overriding functions.

This is helpful decorator. For example we should stop moving the AI if it’s dead 😉 Will be used in Behavior Tree.

Create new blueprint extending from BTTask_BlueprintBase named MoveForwardToPlayer. Open it and add these variables (all need to be Editable!)

This is exactly the same thing I were doing in blueprints in earlier tutorials, but now I can use it on every character – don’t need to recreate this again. That’s power of behavior trees.

Create new blueprint extending from BTTask_BlueprintBase named PlayInstanceAnimation. Open it and create these variables (as always they need to be Editable!)

This task is simple – it is checking if we are in distance to play animation, if yes just play animation as a montage. We will use animations to shoot and deal melee damage. Again this Task can be used on every Character.

This don’t need to be service but I would like to show how they work.

Create new blueprint extending from BTService_BlueprintBase named PlayAnimSequenceService. This will be almost the same node as earlier but it can play couple of animations in sequence.

Open it and create those variables:

This is something like loop – passing all Animations and making sure they have been played.

It’s just storing AnimInstance variable for later use. We don’t need to cast it in Tick.

It’s just calling PlayAnim if can. So basically this service is checking if all animations was played – if yes – play them again. It will be used in Behavior Tree.

This is the last helper – it’s strictly connected with Future Soldier enemy. We need to pass rest data to Blackboard. 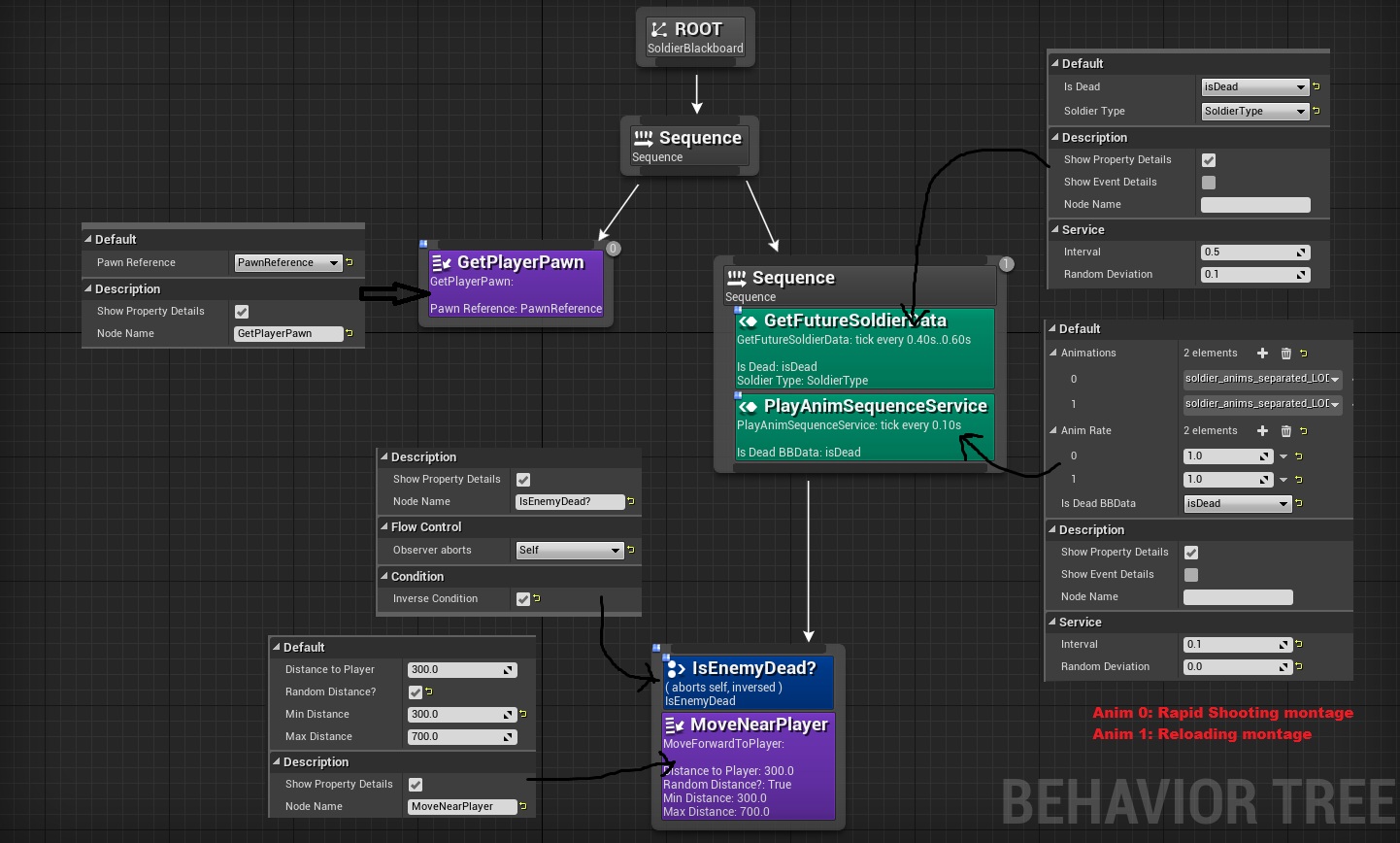 So what’s this doing:

It’s really simple AI but you should take your time to debug it and try to make changes. For example you can use Wait node and make him shoot while standing, then walk again.

How to add services and decorators? 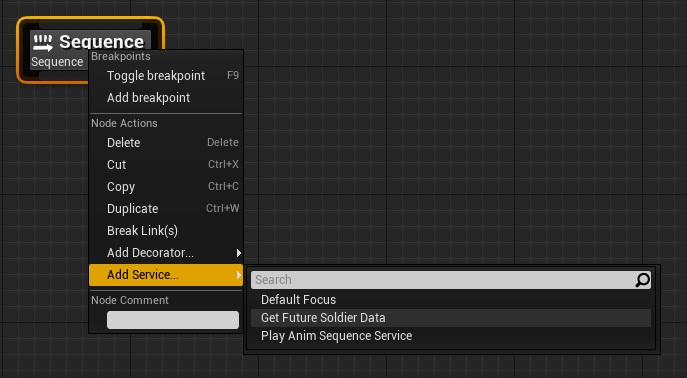 Decorators can be add on top of Task, and as can you see I have one isEnemyDead on top MoveTo with Observer Aborts: Self – which means if false will be returned Move task won’t be fired.

How to add tasks? 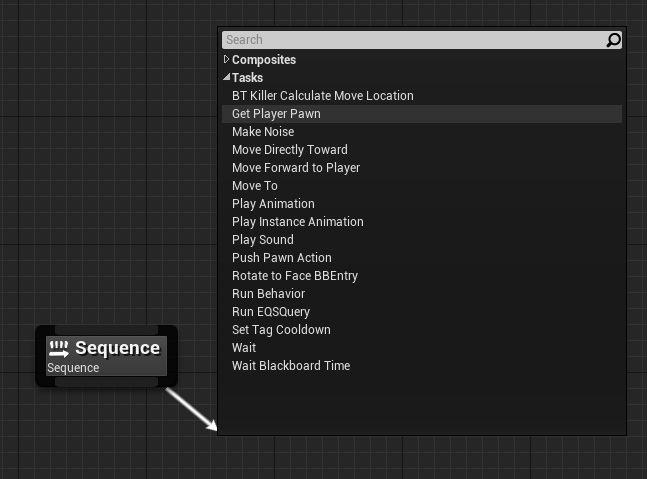 Drag pin from Sequence or Selector. 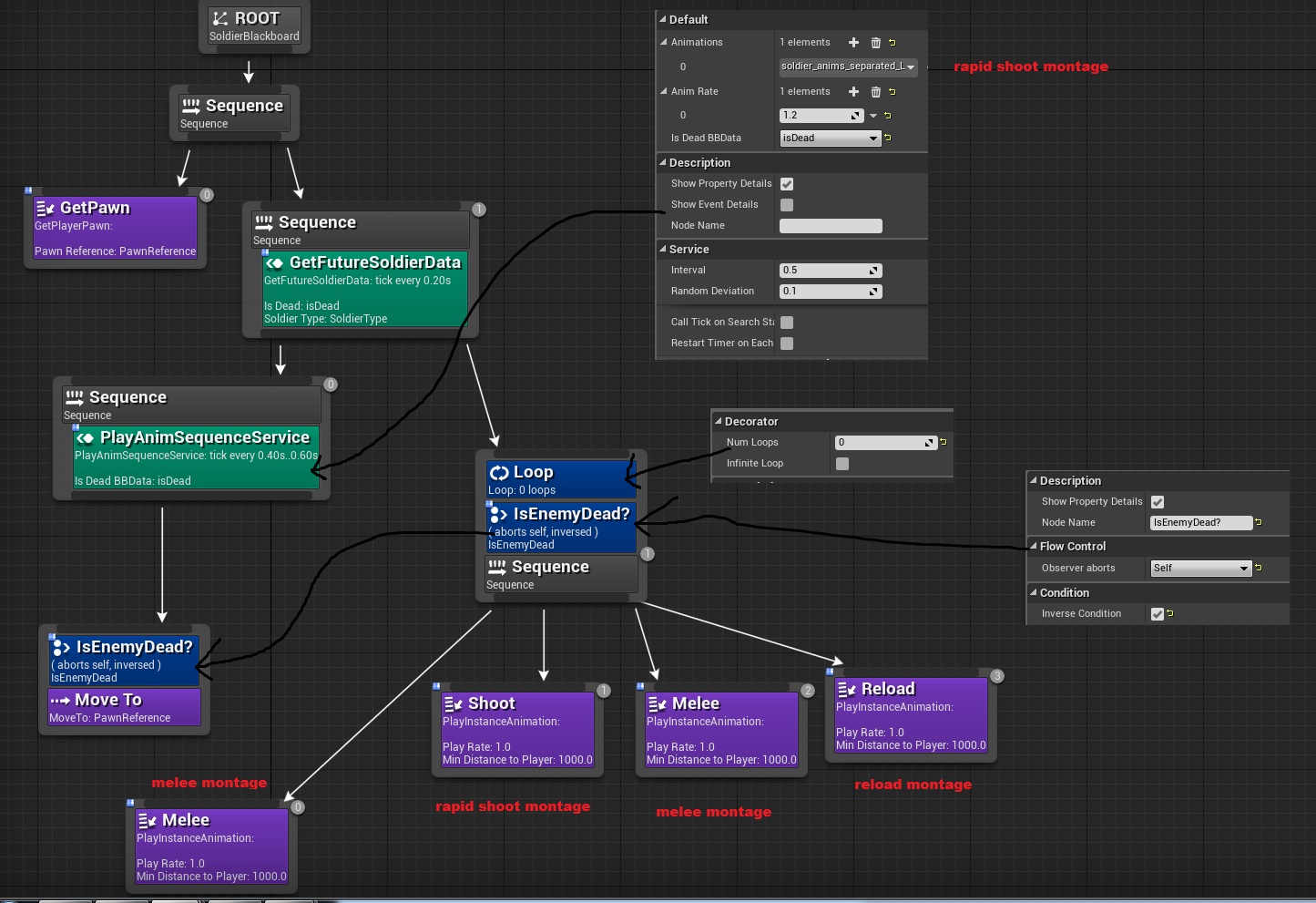 Again it’s really simple AI but you can learn a lot from it! Take your time.

Your AI is playing shooting animation, but he doesn’t spawn any projectile.

I will update earlier created Nofity – Notify_SpawnProjectile to use Distance To Player and spawn muzzle flash effect.

And here’s updated graph – just check if Enemy is in range of MinDistanceToPlayer before spawning projectile. Spawn Muzzle Flash particle Attached to SocketName.

Now in your shooting montages add this notify couple of times, making sure MuzzleFlash projectile is selected and using S_MuzzleFlash socket. 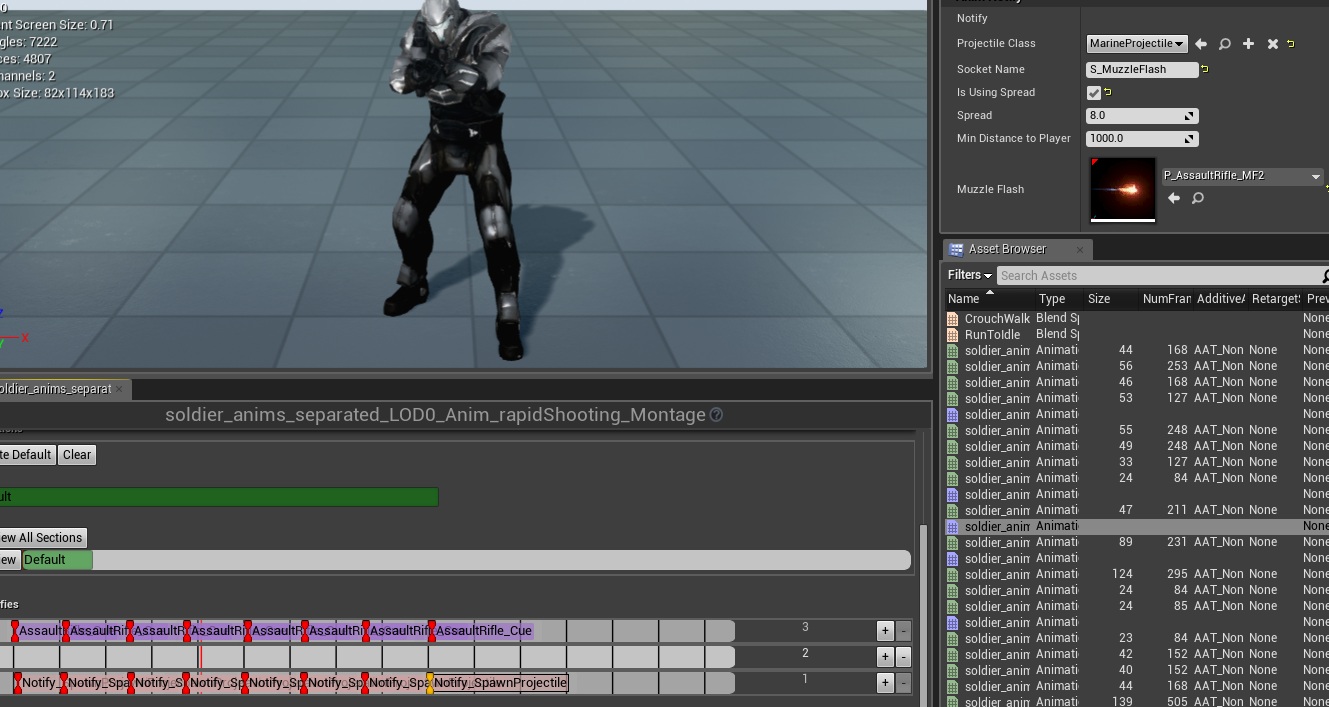 This takes lot of time – but thanks to Behavior Tree Tools I will be able to create new enemies much more faster than in Blueprints.

That’s last enemy for environment that I have! Next ones will be implemented for new environment. Now I will focus on main menu and levels system. 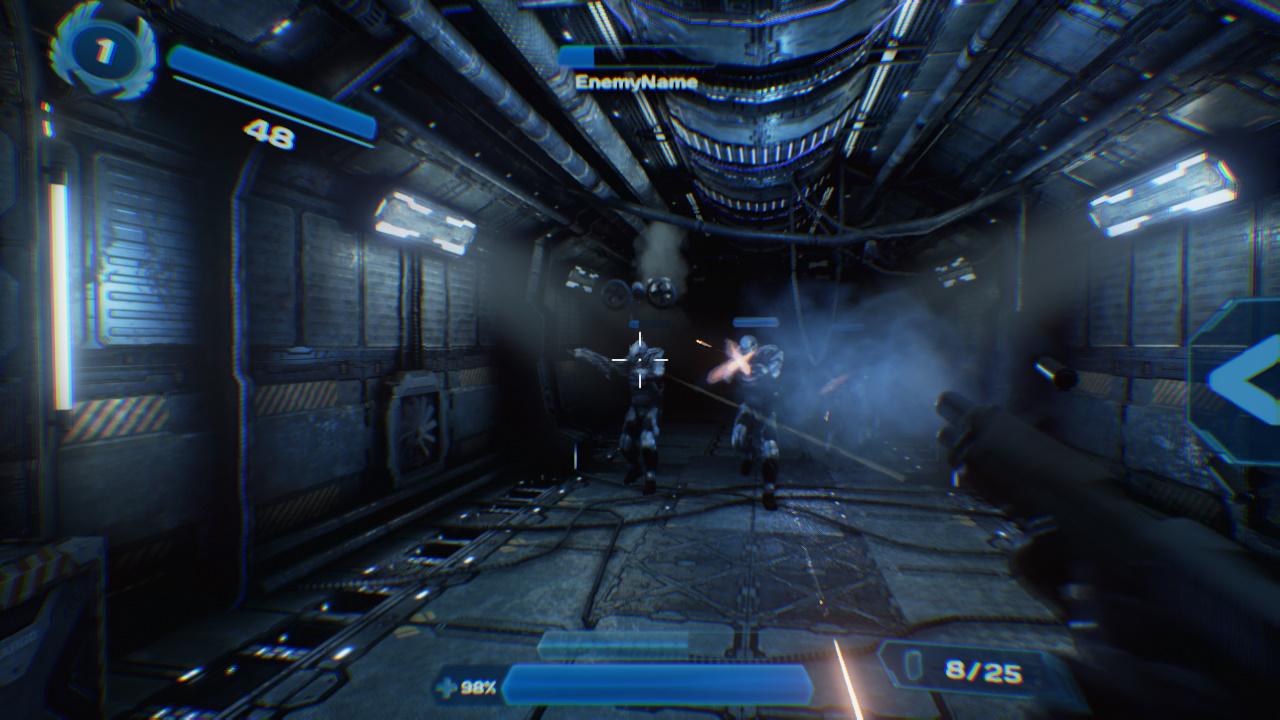