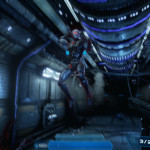 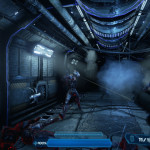 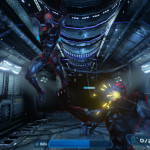 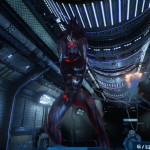 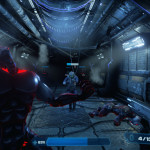 In this tutorial I will be doing Sci-Fi ninja enemy which will:

In this tutorial I will be using High Poly Cyborg Ninja from MijiKai Game Studio. It was created in old 3ds max so you will need to download FBX Converted and convert all animations to 2013 FBXes. They work well.

You don’t need to change scale and anything – just make sure you are importing meshes in bone hierarchy. That’s all. Easy and fast.

You will need to create animation montages from this animations:

I have used CYBORG_NINJA_03 texture as base. Added some rim lighting and roughtness to make better feeling of enemy. Here’s the material:

As for the Physics Asset it will be easy to create it. Remember to place phys materials on body parts. If you don’t know what I’m talking about you should go back to older tutorials.

Make sure body from KATANA bone is breakable. Thanks to that ninja will lose the sword on ragdoll. 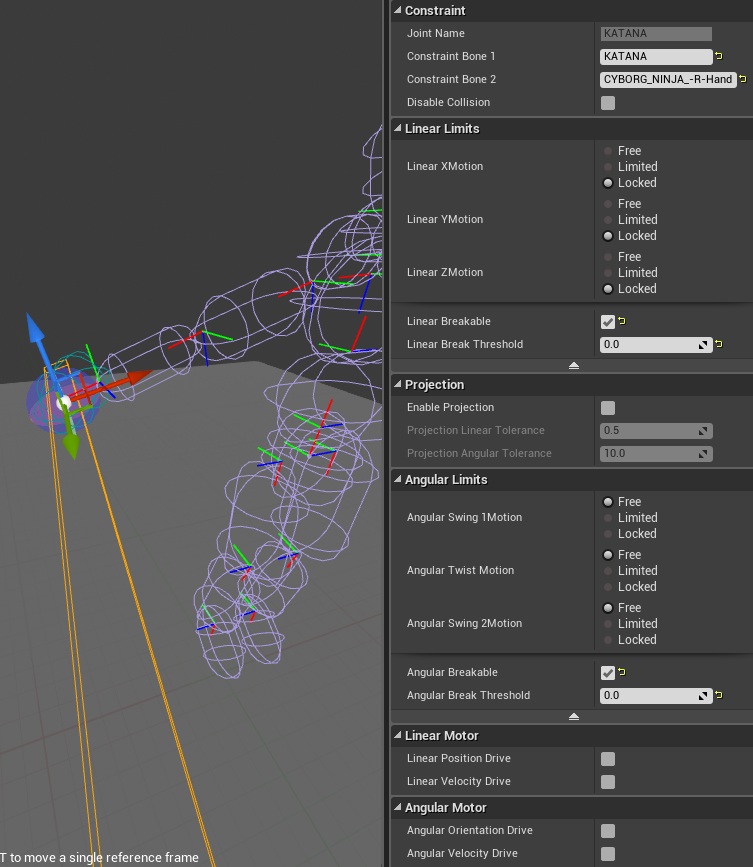 Just taking our blend space 1d and making sure we could use DefaultSlot for montages animations.

Make sure you are driving NinjaSpeed float in Event Graph.

As always taking velocity. This time without any interpolation.

To be sure our Ninja Chick will work we need to do some changes to GameplayCharacter.

You will have issues with ragdoll overlapping Pawn so open GameplayCharacter and make those changes:

Thanks to that Ninja ragdoll will be blocked and won’t be adding impulse to our player.

Now still in GameplayCharacter I would like to show you how to create slomo which won’t be enabled on Player.

We will need to update UI_ChangeWeapon to call those events instead of changing Global Time Dilation. 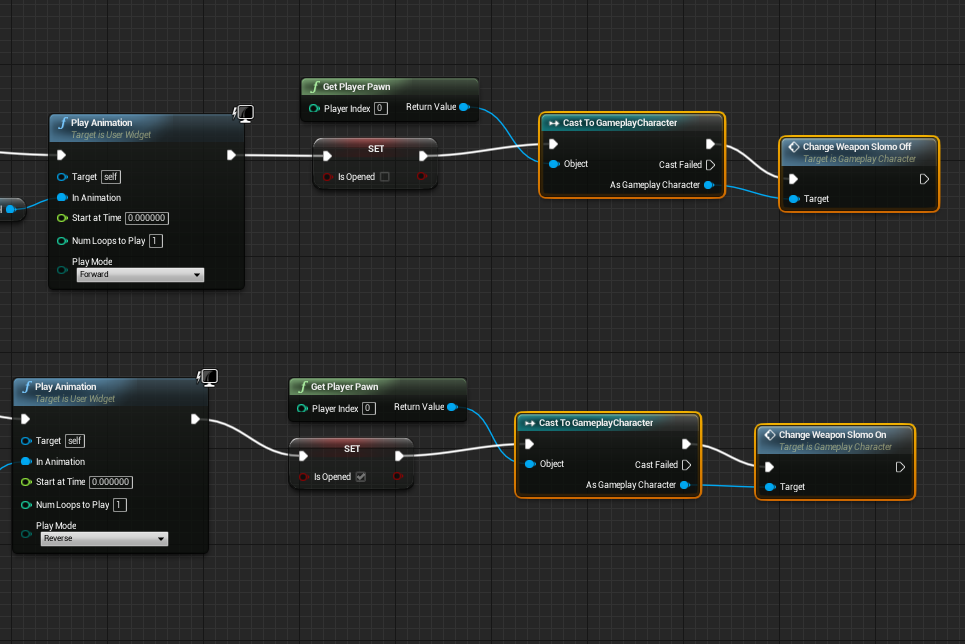 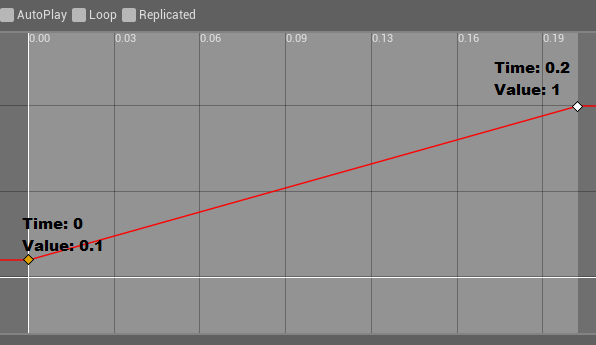 Remember to put timeline length to 0.2.

This function will be triggered by Ninja when we shoot at the head to help out clear rest of the ninja chicks:)

Last thing to prepare is to change earlier created notify: Notify_DoMeleeDamageToPlayer. It isn’t checking if enemy dealing damage is dead or not.

USEFUL TIP: If you are firing animations notifies will be fired as well even if mesh is in ragdoll state.

So now it wont fire if our enemy is in ragdoll. Ragdoll means he is dead.

Now add this notify to your attack animations in places where you want to make damage to player.

USEFUL TIP: I have found sometimes notifies aren’t fired when added to montages. Be sure you add them to animation not anim montage!

We are ready to go with ninja blueprint! Create new blueprint extending from BP_BaseEnemy named Enemy_Ninja open it and go to components.

Yes it’s big but it will prevent overlapping with other actors. Animations are moving a lot from root so it is possible.

Ninja comes with gun as well, attached to bones. We need to hide all of attached weapons instead of back katana. You can do that using Hide Bone By Name node.

This is hiding back katana and showing sword in hands. 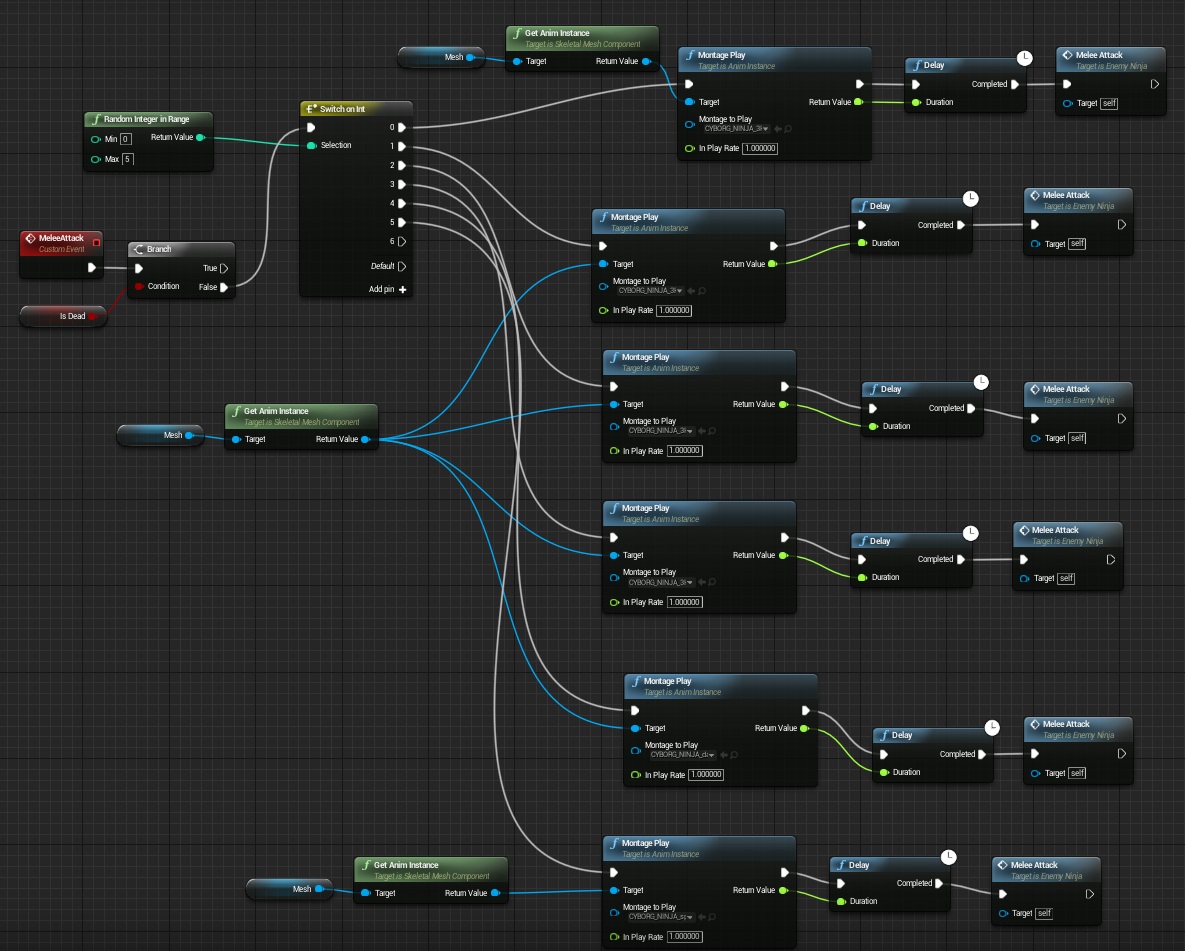 This is just moving ninja forward if far of the player. If near move to player.

Jump and play attack animation, after that do melee attack. It’s really that easy!

This is checking if we hit head. If we are near instant kill (this function was created in earlier tutorials) the enemy and do slomo effect.

Just enable ragdoll and make sure all guns and katanas are hidden.