This tutorial contains basic knowledge about AI / Animations . If you are interested in graphics and animation, go to this website and watch more such tutorials.  It may be complicated for beginners so please take your time to analyze the stuff before implementing. I will create first basic enemy and it will cover:

For this post I have bought SF Trooper form 3dmodels-textures. It’s cheap but as the price quality is low as well. I won’t recommend buying this asset for your game. It’s lacking animations and it’s rigged badly.

It’s a challenge to create procedural generated animations from asset that don’t have enough animations. What I’ve done here you can create in your own custom character. I will let you know about bought assets and if I recommend them for games.

At this point I would like to inform you guys that you can always donate ShooterTutorial (right side of the blog) each donation will be used to buy better assets.

When buying characters with animations outside Unreal Engine Marketplace you need to be really careful. Check if there is 7 days turn back guaranty. Current there isn’t any good Sci-Fi characters on Marketplace and I will use different stores.

Sometimes you will get one .fbx file with all of the animations and a .txt file with frames list. SF Trooper comes with one fbx and importing pipeline looks like this:

Now if you see that animation isn’t looping correctly there is great option in content browser to add looping frames (thanks Epic!) you can do this couple of times to add more looping interpolation frames.

I have this problem on almost every looping animation from SF Trooper.

SF Trooper don’t have stand with rifle idle so I created stand pose using this feature. Just one frame. You should take your time and learn these tools. They help a lot if you don’t have animation guy in your team and you are buying animations from stocks! 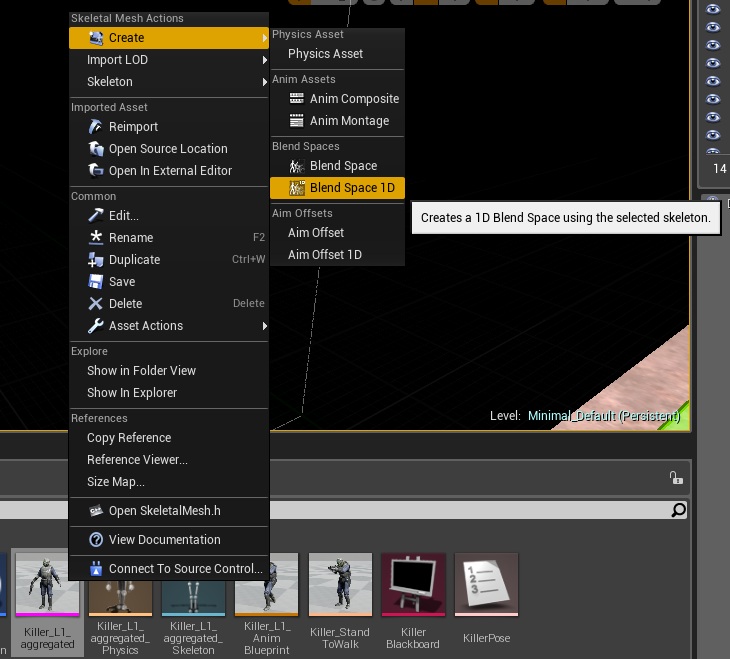 Name it Killer_StandToWalk. Basically Blend Space 1D will blend two animations on given input. You can read about Blend Spaces in my older tutorial blog.

From your skel mesh create animation blueprint and add some variables to it: 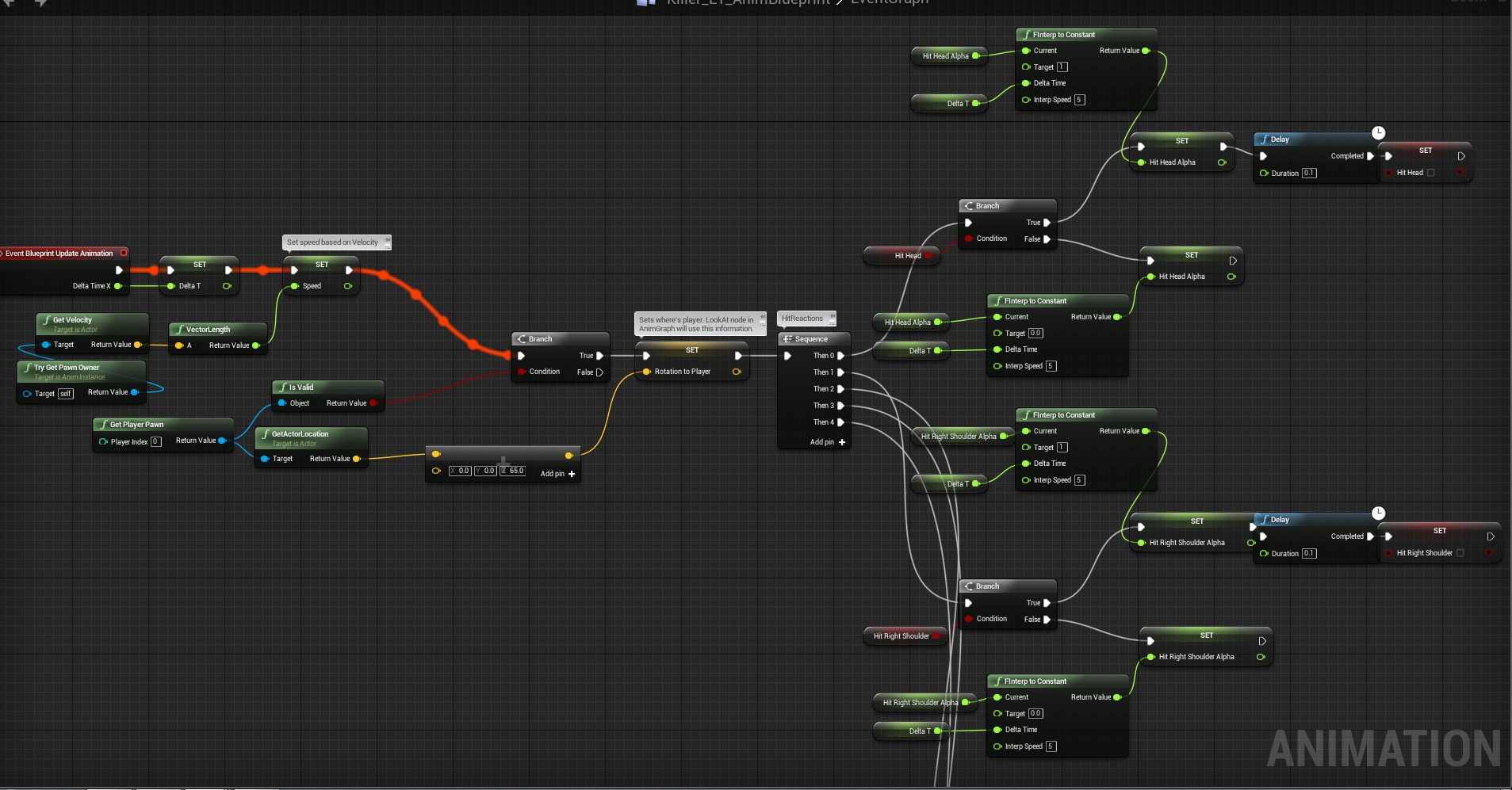 I wasn’t able to print screen of whole Sequence but it’s the same thing as above but with variables for different hit element.

Here’s a screen with rest of it.

You should get the idea. Now let’s move to Anim Graph.

We are using here LookAt node which is really great if you want to rotate heads, arms or whole character toward a point.

All of them use these settings:

Basically if you select this node you will see possibility to change the values in editor. (but they need to be connected to Final Animation Pose! And Alpha should be set to 1!) Using this you are creating additive information for animation.

You can test it out by switching bools, but make sure you don’t have any “cast to” or “is valid nodes” in your event graph.

Animation blueprint is almost done, we don’t have an event for switching the bools.

To create Animation Montage from animation just right-click on the animation -> Create -> AnimMontage.

The best part of AnimMontages is they can be assigned to slot. We are using this to blend upper body with full body.

Now go back to your animation blueprint and let’s bind OnHitBodyPart dispatcher. 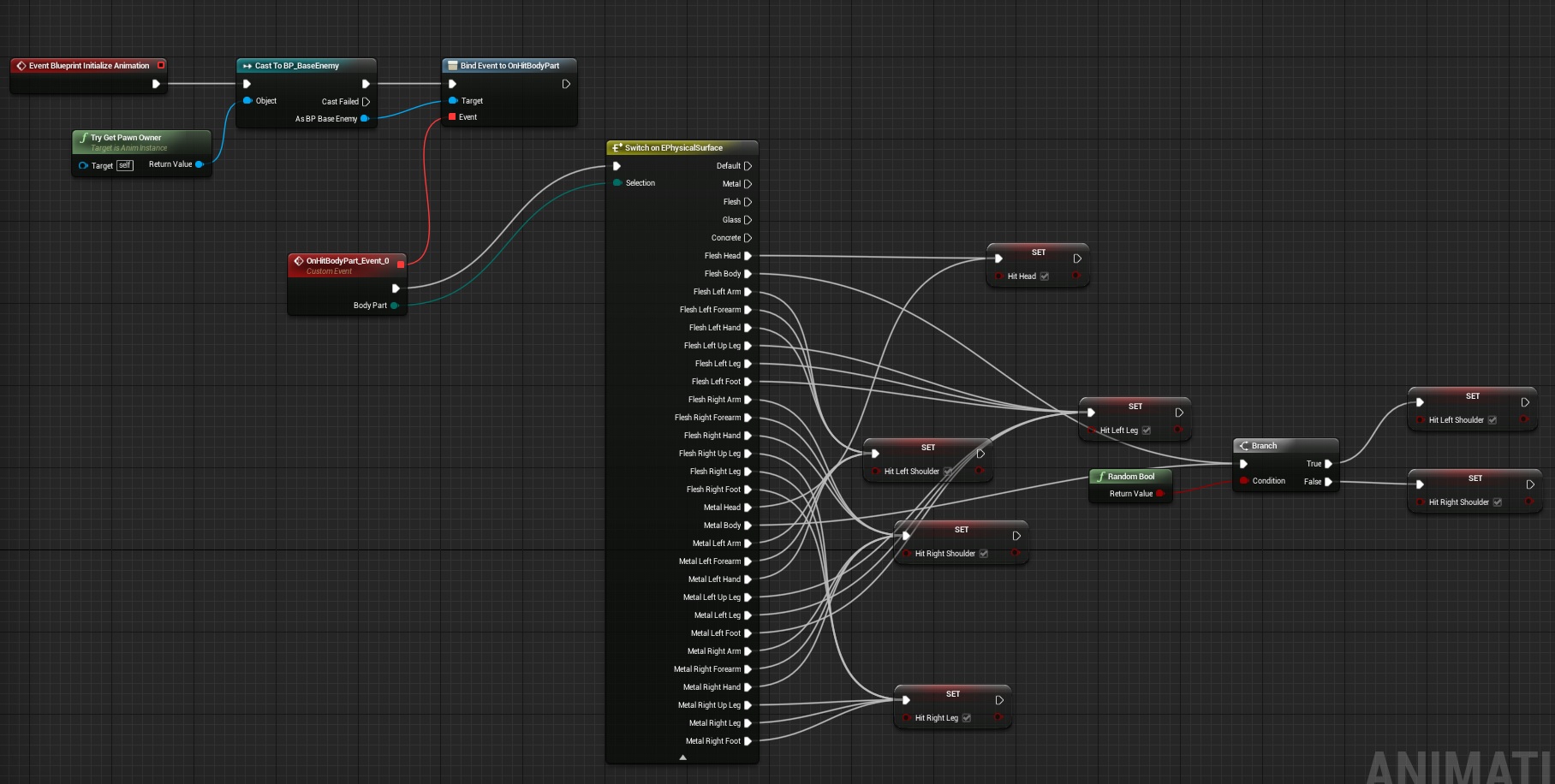 Yea it’s messy. I’m using this big enum because maybe later it will be handy. You could prepare your own enum with smaller amount of body types.

Now create new blueprint extending from BTTask_BlueprintBase named BT_KillerCalculateMoveLocation. Add one variable to it named Location from Blackboard Key Selector and make it Editable. Thanks to this we will be able to choose blackboard data in behavior tree.

Add Event Receive Execute. It will be our task to find location near player.

Basically what he is doing:

This class will drive everything. Add variables:

It’s really simple AI and its great way of teaching AI.  Just place this actor to your level and check it out!

Now if you want to see your ragdoll you need to create Physical Asset from skel mesh. I won’t tell you how to do this but watching tutorial from Epic is the best way to teach how to prepare phys assets for ragdoll. After watching you should be able to create this by yourself!